Edit: So, I missed Ray’s Curren’s March 28th article at AWK on the Brazil-Canada match, which he attended in person. He notes that Brazil used a 4-4-2 formation, which does match the notation used in the CBF’s match report. Based on a closer look at some CBF news items on in-camp scrimmages earlier this year, it seems that new head coach Jorge Barcellos has been trying the 4-4-2 formation at least since January.

At this point, consider this post useful for historical, e.g., non-current, purposes. Although, with only a few months to go until the Olympics, it is possible that Barcellos may fall back to this formation.

Under Kleiton Lima, the Brazilian Women’s National Team, used a 3-4-3 formation, which is nowadays considered “unorthodox” compared to the much more common four-back systems used by the United States Women’s National Team and most other international women’s teams. (E.g., see this Ray Curren article at AllWhiteKit.com, as well as this short AWK item).

However unorthodox this formation is compared to most others, Brazil’s use of the 3-4-3 formation is modern in two major ways: (1) its lines are fluid, and (2) it has more than three distinct lines.

In this article, Brazil’s 3-4-3 formation is broken down, position by position; then quickly compared to other three-back formation, and finally, the pro’s and con’s of the formation are summarized.

Kleiton Lima, on his website (KleitonLima.com.br), posted a detailed starting line-up for one of Brazil’s matches during the 2011 Pan-American Games. The starting eleven players, as well as the substitutes, were all listed with their specific playing positions. The starting eleven positions were, with English translations added, as follows:

(Note: For more on these Brazilian Portuguese terms, as well as others, see the end of this article.)

Graphically, the formation would look like the following, on-field: 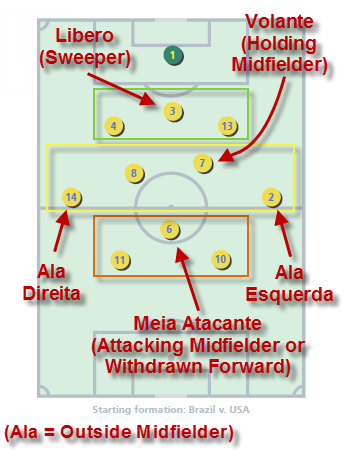 (The basis of this graphic is taken from the technical report for the 2011 Women’s World Cup, but has been modified and marked-up: I have moved the volante position slightly behind the other center midfielder in order to differentiate the two positions more.)

Starting on the backline (the green rectangle), there are two outside centerbacks (#4, #13) and a middle centerback (#3) who acts as a sweeper, e.g., as a free-roaming, zonal defender. The outside centerbacks generally mark the opposing teams forward(s), but can also play zonally.

In the midfield (the yellow rectangle), there are two central midfielders (#8, #7), with one of those players (#7) specifically having the defensive midfielder (volante) role. The other midfielder (#8), who is simply denoted as the “meia,” could be any type of non-mostly offensive midfielder, such as a deep-lying playmaker or a box-to-box (AKA “two-way,” as in offensive and defensive) midfielder.

Out on the flanks, in the midfield are two wide players (#14, ala direita; #2, ala esquerda), who generally play up as outside midfielders, akin to wingers in a 4-4-2 systems, but can be pushed back to more of a fullback role (e.g., as wingbacks) when the other team is pressing with the ball. When Brazil has a kick-off from the center circle, these players will normally start at the halfway line and sprint down the sides. When the other team has the kick-off, these players will start about ten yards deep into their own half.

Up top (the dark orange rectangle), here is where things get a wee bit more unusual. There is no center striker, per se, as the middle forward (#6) plays in a withdrawn position as the “meia atacante,” which literally means “half attacker,” but may be better translated as “midfield attacker.”

Depending on how one defines the midfield and attacking lines, the meia atacante can either be considered an attacking midfielder or a withdrawn forward (a.k.a,  a “deep-lying forward). (In the 2011 WWC, Germany played with a withdrawn forward. Their formation was designated a 4-4-1-1 by the WWC Technical Study Group.) But, Lima considers this formation a 3-4-3, which was how it was described in the media during the 2011 WWC, on his website, in the link provided, earlier (“3x4x3”), and by the 2011 WWC TSG.

The two true forwards in the formation (#11, #10) tend to have free roles and can be the equivalent of outside forwards (classic wingers); central strikers; or even attacking midfielders depending on the flow of the match.

Note: Numerical notations for formations, do not begin to fully describe how a specific soccer formation is implemented. This is especially true when different people have different interpretations of the same team’s implementation of a particular formation. The general style of soccer the team plays and the individual personalities of the players can affect how the formation is perceived by different people.

From an American perspective, I would classify Brazil’s system as 3-4-1-2, akin to the German 3-4-1-2, but with a distinct Brazilian flavor. Position by position, Germany’s 3-4-1-2 and Brazil’s system are essentially the same. Although, the German system was probably more defensive minded and is described as having two defensive midfielders rather than just one true defensive midfielder as in Brazil’s system. Another key difference between the two systems is the style and/or personalities of the forwards. Germany’s strikers (e.g., Jürgen Klinsmann and Rudi Völler in the 1990 Men’s World Cup) were more of the traditional European mold in that they played high, beyond the midfielders. Meanwhile, Brazilian forwards are expected to play more dynamically, e.g., by going into midfield (citation needed).

*Argentina’s formation is sometimes denoted as a 3-6-1, with Maradona being included in the midfield as an attacking-mid, rather than as the second striker.

A three-back system is vulnerable on the flanks, especially when play is quickly switched from one side to the other, but that is less of a concern on the women’s side where long cross-field passes are fairly uncommon.

Also, in such a system, the three-woman defense can be pulled out of shape by a dynamic opponent with creative attacking players.

And, for an in-depth discussion of 3-5-2 formations, as used by Brazilian men’s club teams, see 3-5-2: dying in Europe, less so in Brazil (santapelota.blogspot.com).

For those who want to dig into the CBF’s match write-ups, Brazilian news articles, and Brazilian club websites. Masculine and feminine spellings for the terms are provided where applicable (and known).