Offence
A player in an offside position is only penalised if, at the moment the ball touches or is played by one of his team, he is, in the opinion of the referee, involved in active play by:
• interfering with play or
• interfering with an opponent or
• gaining an advantage by being in that position

No offence
There is no offside offence if a player receives the ball directly from:
• a goal kick
• a throw-in
• a corner kick

Note: The LotG PDF file also has interpretation guidelines with example diagrams, starting at page 102. Included in those guidelines are these key definitions: 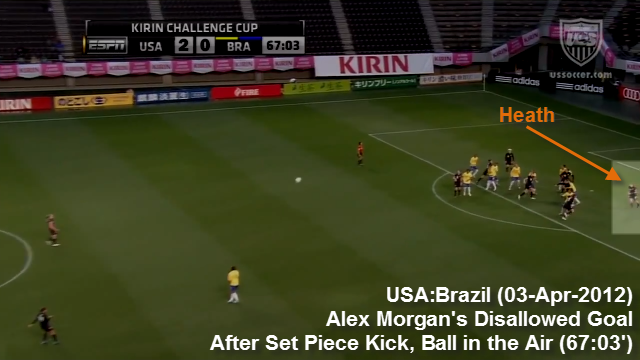 #2. A few to several tenths of a second after Cox kicks the ball, Heath comes into frame.

For the USA, the players to watch during this sequence are Alex Morgan (obviously), Abby Wambach, Megan Rapinoe, and Tobin Heath. On Brazil’s side, only the last two defenders really matter. The last defender is the goalkeeper, Barbara. The second-to-last defender appears to be Aline, who is just to the left of Wambach when Stephanie Cox kicks the ball.

Alex Morgan: Morgan is clearly farther away from the goal line than the last two defenders. In fact, she ran past four defenders to get to the ball. Thus, she is not in an offside position, which renders the rest of the Law inapplicable to her.

For the first possible offense, Wambach does not play or touch the ball, therefore, that cannot be used to justified an offside call. For the second possible offense, Wambach does not appear to interfere with Aline’s or any other defender’s vision. The same appears to be true for defender’s movements. Nor, does it seem that Wambach prevents any defender from playing the ball via a deceptive or distracting gesture or movement. The third possible offense does not apply because Wambach never touches the ball before Morgan takes her shot.

While Wambach and Aline are moving after the kick, there might be a case that Wambach obstructs Aline by pushing her backwards. But there jockeying for position seems more 50/50 challenge, with no egregious pushing or pulling. Especially since, at first, the two move somewhat different directions. Thus, this potential obstruction seems too far removed from the time of the actual kick to be relevant to the offside call.

Megan Rapinoe: Rapinoe, like Wambach, may be in an offside position. However, Rapinoe is a few yards outside the main scrum, has no active defenders around her, and barely moves once the ball is kicked.

Tobin Heath: Heath makes a looping run behind Brazil’s field players, but is out of view when Stephanie Cox kicks the ball. Assuming that Heath is in an offside position at the moment Cox plays the ball, the only possible infraction that Heath may have done is interfered with a defender, as the other two offside offenses require touching the ball. And, Heath did not touch the ball during the free kick play. And, the only possible defender that Heath may have interfered with is Barbara, the ‘keeper.  But, I do not see how Heath could have clearly obstructed the vision of Barbara, who was moving around the goal. Physical obstruction of a defender is unlikely, given that Heath was essentially running free.  A distracting or deceptive gesture remains a possibility, although from what I see of Heath in the video, she does not seem to be doing anything other than making a leisurely looping run.

SO WHAT DID THE ASSISTANT REFEREE AND/OR CENTER REFEREE SEE?

Good question. I am having a hard time coming up with a possible scenario that does not involve a significant refereeing error.  One thing to remember is that the referees only have one angle to see the play, which is at full-speed, with no instant replays.

Assuming there was no offside offense, the simplest explanation is that the assistant referee lost track or did not see Morgan before she was into her run. Another simple explanation is that a referee confused Morgan with one of the players who may have been in an offside position.

In any case, the center referee did seem to make a fairly quick decision in disallowing the goal, without any substantive consultation with her assistant referee.

Edit: One thing I forgot to include in the original post is that the official call appears to be for an offside infraction. From the comment I added in reply to Diane’s:

[A]fter the play, the center referee raises her left arm straight up, which is the signal for an indirect free kick — the normal restart for an offside. Also, the assistant referee’s flag position at the end of the play is pointing straight out and level, which indicates an “Offside in the centre of the field.” If the flag was pointing at a 45-degree angle, parallel with the field, in her left arm, then that would indicate a foul by an attacking (USA) player.