On Friday, January 31st, CONCACAF released a preliminary schedule for this year’s edition of the CONCACAF Women’s Under-17 Championship, which will be hosted by Mexico from April 18th to May 3rd (CONCACAF.com).*   Up for grabs at the tournament are three tickets to November’s FIFA Under-17 Women’s World Cup in India.

*This is later than the earlier announced dates of March 21st to April 5th.  See this article on CONCACAF.com, which lists the original dates.

All matches will be played at the new headquarters campus of the Mexican Football Federation (“FMF”) in Toluca, which is about 30 miles west of Mexico City.  The facility, completed in 2017, features five full-size soccer fields:  Two with natural grass surfaces and three with turf surfaces.

The main grass field is directly off the headquarters building, which has an integrated – and covered – stand.  The seating capacity for this integrated stand looks to be in the range of 1000 to 1500.

The architecture website ArchDaily.com, has a short write-up on the FMF campus, along with over a dozen photos and a site plan of the campus.  More photos, as well as a satellite view of the facility, are available via Google Maps.

Like the upcoming CONCACAF Women’s Under-20 Championship, this tournament is following a new format, which was first used during the previous men’s youth cycle.

Instead of two groups of four, where only the top two finishers in each group move onto a four-team knockout bracket, there are four groups of four, featuring the top sixteen U-17 teams, based on a historical ranking system, who all automatically qualified for the final group phase of the tournament.  The top three teams in each group qualify for the knockout phase, where they will be joined by four lower-ranked teams, who qualified via a preliminary group stage that was held during the summer of 2019.

Back in May 2019, a draw was held (YouTube) to determine both the preliminary qualification groups, “A” through “D”, as well as the final stage groups, “E” through “H”.

The final phase of groups is as follows:

From the preliminary stage, Belize, the Cayman Islands, Guyana, and Honduras all qualified for the knockout stage. (CONCACAF.com) 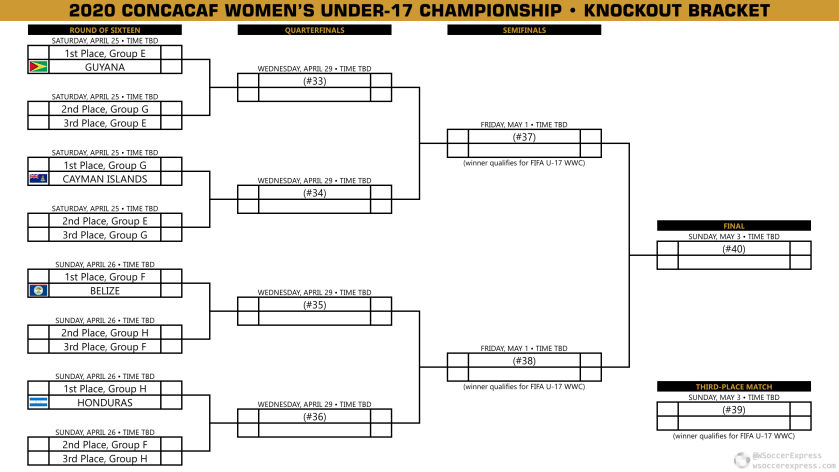