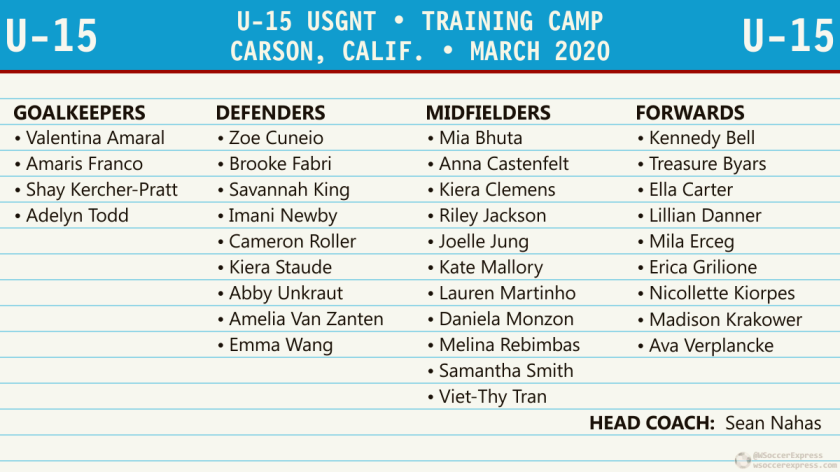 The Under-15 United States Girls’ National Team is currently holding its first camp of 2020.  For the camp, which runs from Monday, March 2nd, to Sunday, March 8th, 34 players, all born in 2005, have been called up.  All but six of those players previously attended last October’s talent identification camp.

Leading the camp, which is being held at the National Training Center in Carson, California, is Sean Nahas, who is an assistant coach of NWSL side North Carolina Courage (profile), as well the Development Academy Director for the Courage’s youth teams.

The remaining 28 players all attended last year’s transitional 59-player U-15 identification camp, which under U.S. Soccer’s refreshed talent identification program could be retroactively considered as a U-14 GNT camp.

Seven of those 28 players had previously called into last cycle’s U-14 USGNT, including Amelia “Mimi” Van Zanten, who was a member of the U-14 squad that won the 2018 CONCACAF Girls’ Under-15 Championship.   The six other players with U-14 call-ups in 2016 are Treasure Byars, Anna Castenfelt, Joelle Jung, Lillian Danner, Madison Krakower, and Melina Rebimbas.

In June, the U-15 USGNT is scheduled to travel to Europe for an overseas camp where they will play their age cohorts from the Netherlands and Germany. (Known YNT calendar for 2020)  Another domestic camp will likely be held before that.

A few 2005-born players have recently attended older youth national team camps:  Maggie Taitano and Gisele Thompson were called into both U-16 USGNT camps this year, including the trip to England for a UEFA development tournament, plus Olivia Moultrie, who attended both U-17 camps held so far in 2020.

Players with italicized entries have not been previously listed on a published YNT camp roster.  They are also identified via an asterisk (*).

This list is a modified version of the one published by U.S. Soccer.   Spelling and style corrections have been made.  Club names have been standardized.